It’s “Feed Your Soul Friday” over at Adventures in the Kitchen! 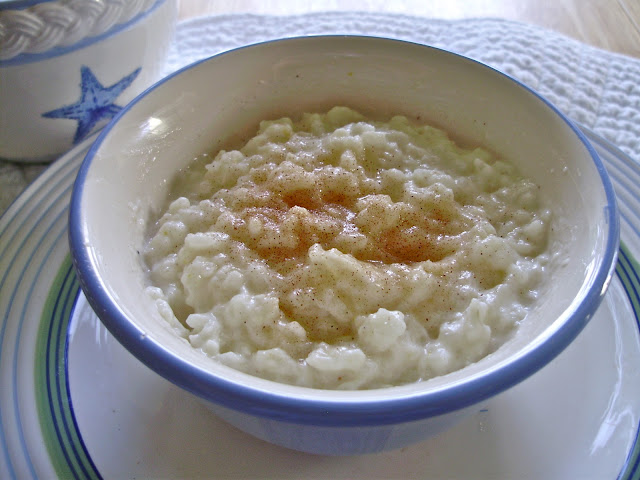 My family’s traditional Christmas Eve dinner is Swedish “milk rice.” Mother always started it early in the morning, stirring away at a pot that seemed to hold nothing but milk.

As the day progressed, we’d start checking the pot more and more anxiously, wondering if the meager grains of rice at the bottom would swell up in time for Christmas Eve dinner. Most of the time they did…but a few years, they waited until Christmas Day breakfast.

Of course, there was the constant danger of scorching the milk and ruining everything. (Which happened when an unnamed teenager was in charge of stirring it one year…)

When Mother discovered a recipe which involved parboiling the rice to speed up the process, we were skeptical. Part of our Christmas Eve tradition was the all-day uncertainty about the milk rice!

Then we actually tried this recipe for Finnish Rice Porridge.

It took less than two hours, start-to-finish, and tasted (to quote Mother directly) “better than the original!”

Which means that if a distracted Choleric teenager multi-tasks when she’s supposed to be stirring, you’ll actually have time to throw out the scorched batch and make an entirely new one before anyone starves.

(Not that I know this from experience or anything…!)

Place rice in sieve. Pour boiling water over rice slowly.  Let drain.
Bring water to boil in large pot. Add rice and butter.  Reduce heat to low; cook uncovered for 10 minutes or until water disappears.  (Rice will not be completely tender.)
Add above ingredients to rice.  Bring to a boil, stirring constantly.  Reduce to lowest heat.  Simmer uncovered, stirring occasionally, until as thick as oatmeal (30-45 minutes.)
Stir in lemon peel and vanilla.  Remove cinnamon sticks and serve with cream and cinnamon sugar OR Berry Sauce (below)

Put all ingredients in a 2 quart pan.  Boil gently for 10 minutes.
Add to above mixture. Cook, stirring constantly, until thick and clear.
Chill to serve cold.